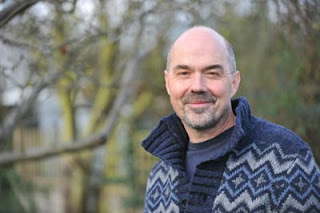 Yesterday was talk time again at Edge Hill. Chris Beckett, unrelated to Sam the playwright as far as I know, was the main event, though there was more (you'll have to read more to find out! Ooh, I'm horrible!). Yeah I feel I could really babble on about this, but I'll try not to. Me and an MA buddy were talking afterwards about how, no matter what poetics or interviews you read, there is nothing like seeing a writer talk live. The main part of their appearance is either reading from something they've written or them just talking, but the QnA especially is completely ad-libbed, so it gives their message a weight that you don't get with a piece of poetics they've re-drafted and crafted. In honour of this 'live' wonderment, I'm not going to edit this post. As you can tell it's getting pretty ragged already, so I'll try and crack on.

I felt his points were particularly powerful as they addressed the professional writer and the 'real writer'. That is to say, the professional one is the one the public sees, and his message on the professional side was that one has to be proactive. Even if you don't like people (who, me?), you have to accept that you can't shut yourself away in your garrett and thrive. You have to network, to make a nuissance of yourself and to GET OUT THERE basically.

To the 'real' writer (I wish I'd not chosen that way of saying it, it creates so many obvious problems of semantics...), he said be prepared to write shit. I don't think he swore. Embrace writing, don't worry that not everything is your best and, indeed, accept that some things are beyond salvation. Keep going though, and you'll find those golden nuggets in time. Now these are all simple messages for writers. You'll have heard them all many times before. What me and my MA chum were saying, though, was that the way they say it makes it seem new and refreshing each time. It's like a collage of similar messages making a pretty pastel picture of meaning. Also, for his part, Mr Beckett is a very warm and humble man. He read from Dark Eden which sounds fantastic, it's definitely going on the wishlist.

As I said, though, Chris wasn't the only writer I saw. Obviously there were Edge Hill tutors (it's always nice to see Ailsa Cox at events, she always does a lovely job compering), but also Carys Bray. I took a chance to ask her a few questions off the cuff. I'm ashamed that I spent so much time blathering on about what I was up to when she asked, a bit embarrassing but that's my fault. I asked her what life was like after being published, and it seems the world has kept turning for her. She laughed that it sounded depressing, but I don't know, maybe it's quite the opposite. Anyways, her book Sweet Home is on my wishlist and for some reason I haven't bought it yet. There is, should we say, a slight issue with last month's pay from work, when that gets resolved I PROMISE I will buy her book, I've been looking forward to it for ages. I'll even put off buying my bongos.

Right you can tell this post hasn't been edited. Perhaps it's not the most fitting tribute to Chris' live appearance, as he was actually very eloquent. I think it's fair to say, even by my usual standards, that this has been stilted, awkward and generally like a politician's apology... Still, I said I'd do it. Next one will be better... Please come back!
at 23:49:00